The Tuamotu Islands are part of one of the 5 archipelagos which compose French Polynesia and it represents a total area of 850km². This archipelago is made up of 76 atolls (lower islands, without reliefs) situated in the Northwest of the South Pacific Ocean.

As many shades of blue as there are, that’s how to summarize the landscapes of the Tuamotu. This archipelago extends as far as the eye can see over 1 700 kilometers long.

Life is made of surprises in Tuamotu Islands. In Rangiroa and Fakarava lagoons are ultramarine blue. In Manihi and Tikehau beaches are pinkish in color. In Mataiva, Ahe, and Anaa their reefs are covered and covered successively by the sea revealing their secret life.

Its sea beds are unequaled, its translucent waters are conducive to snorkeling, its passes open on the great total blue.

In Tuamotu, life is all about the water. 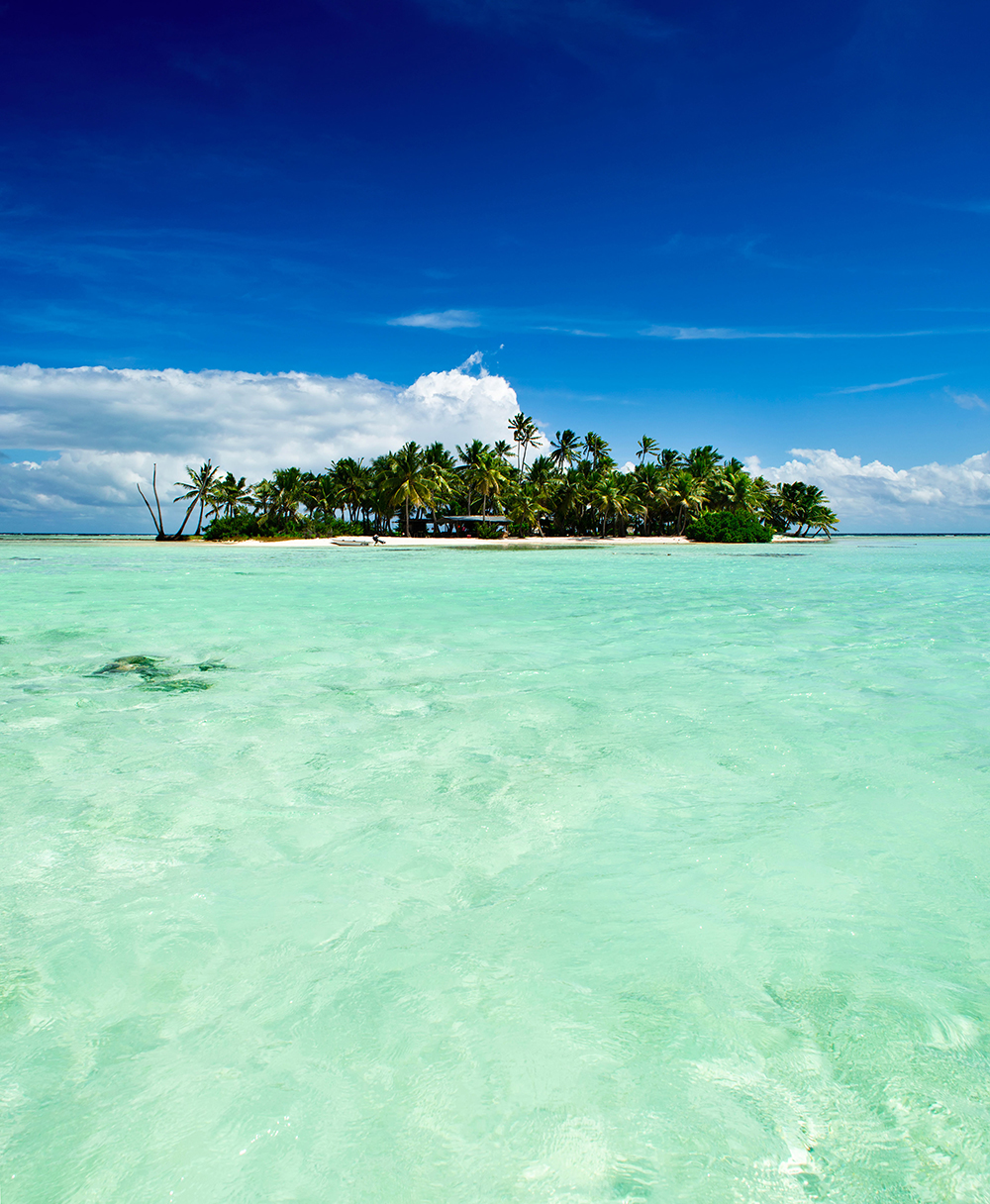 Rangiroa is part of the group of atolls of the Palliser Islands of the Tuamotu archipelago. This island is famous for its diving spots allowing many incredible encounters: dolphins, sharks, turtles, corals, Manta rays, and many species of fish. Rangiroa will never stop to surprise you. Marine life is exceptional.

Let you be guided by the dolphins at Avatoru’s pass or at Tiputa. Discover the “bird islands”, a preserved sanctuary, where observation is doing far away not to disturb species that are living there. In the middle of the different motu (islets) of Rangiroa you will get to admire natural pools, small blacktip sharks nurseries, and other marine treasures.

Here also, the culture of the pearl is honored by the important surface of the lagoon owned by Rangiroa. A few years ago, pearl farms occupied approximately 500 hectares. Nowadays there is only one left: the Gauguin’s Pearl.

Even more surprising,  Rangiroa hosts vines in the middle of the coconut trees. Rangiroa produces its own wine and it is cultivated in compliance with the biological codes of the environment. You will not miss tasting it with local meals.

Distance from Tahiti to Rangiroa : 356km

Flight time from Rangiroa to :

Tikehau is part of the group of atolls of the Palliser Islands of the Tuamotu archipelago. This island is famous for its beaches made of pink sand. A little walk on beaches straight out of an imaginary world will lead you to the “bird Island”...simply captivating.

On the seaside, the island is also known as a cleaning station for Manta rays that can measure up to 3.5 meters in length. Tikehau waters are their playgrounds, go to their encounters and these moments will be unforgettable. In the distance, fins of blacktip sharks can be seen enjoying the calm of the lagoon to take the opportunity to slip between the legs of curious visitors to meet them.

Continuing the walk toward Eden Island, you will discover the secrets of life in self-sufficiency. Composts, vegetable, and botanical cultures… this visit makes you think about daily life's new habits.

On Tikehau reigns the quietness. Seaside, Tuheiava pass houses the cohabitation of tunas, napoleons, and sharks in a peacefull atmosphere. Landside, the island tour can be realized walking or biking which offer a breathtaking panorama. Life is simple and the inhabitants with a legendary smile will make you feel like you are in paradise.

Tikehau teaches the grace to enjoy the moment.

Distance from Tahiti to Tikehau : 307km

Flight time from Tikehau to :

Manihi is part of the group of atolls of the King George Islands of the Tuamotu archipelago. Its sea beds are a real living painting where housing turtles, fish of any size and any shape, sharks, dolphins, Manta and eagle ray, corals…. With a diving tank or just a mask, the exploration of its waters brings freedom, grandeur, and frenzy.

Landside, the welcoming of the inhabitants marks the arrival on an island where it is good to live. In the distance, Turipaoa pass, the only one, is more than 50 meters long. At the bottom of the atoll, there are natural pools offering refreshing and historical baths.

Manihi is known as the mystical cradle of the pearl, it is there that the first pearl farm was born in 1968. Thus, this island is considered a place of pilgrimage for the lovers of the mother-of-pearl and its jewel.

17 remains of mara’e (sacred temples) have been discovered on the atoll cohabiting with Saint-Joachim churches built from corals and lime.

Distance from Tahiti to Manihi : 515km

Flight time from Manihi to :

Fakarava is part of the group of atolls of the Palliser Islands of the Tuamotu archipelago. This island is known by amateur and experienced divers, it offers an unequaled panel of sea beds. Here and there, sharks, dolphins, rays, multicolor fish, turtles, and many other species abound the depths and the surface of the waters of Fakarava.

Its idyllic beaches where a sunbed or a hammock are enough to relax cradled by the sound of the waves that crash on the shores. The beauty of the landscapes of this island is so pure that it is difficult to get tired of it.

Its beauty and biodiversity have allowed it to obtain the label “Biosphere Reserve” from UNESCO.

Distance from Tahiti to Fakarava : 452km

Flight time from Fakarava to :

Nukutepipi is part of the group of atolls of the Duke Gloucester Islands of the Tuamotu. This private island is the most exclusive in the world; a paradise of only 5.6-kilometer-long being this way the 7th smallest atoll of the Tuamotu. The island dedicated to the wellness of its visitors and can accommodate up to 52 guests or only one couple.

Its village is today a perfect mix between modernity and ecology. Here is cultivated: honey, 40 varieties of vegetables, many farming, and more than 16 000 coconut trees. Nukutepipi aims at self-sufficiency.

Unusual meetings are not lacking on this island: butterflies, hermit crabs, frigate birds… as much as land animals than fish in the sea. Its greatest asset: no mosquito on the atoll which is the result of the daily effort of a biologist team on site.

Nukutepipi, a true paradise on earth.

Distance from Tahiti to Nukutepipi : 746km

Flight time from Nukutepipi to :