The Society Islands are part of one of the 5 archipelagos which compose French Polynesia and it represents a total area of 1 593km². This archipelago is made up of 8 islands and 6 atolls (lower islands, without relief) and is in the Northwest of the South Pacific Ocean. 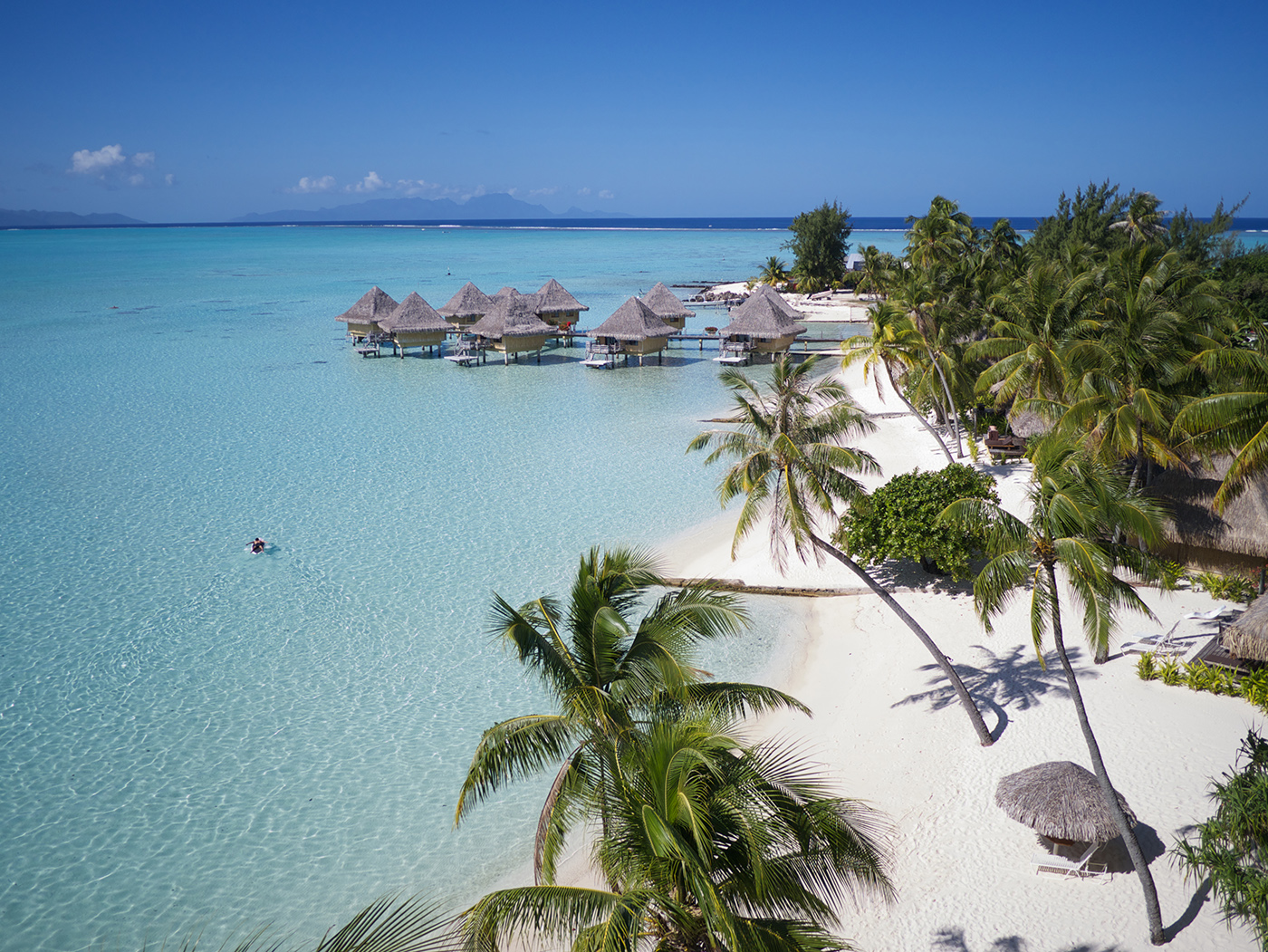 This archipelago concentrates a big part of the emerged islands of French Polynesia and it concentrates also the most inhabitants. Here, a variety of landscapes between lagoons and mountains allows a panel of activities for its visitors: hiking, sight tour of historical sites, scuba diving, fishing, ATV or jet ski tours, 4WD safari in the mountain, boat tours, island tour, paragliding, helicopter tour… for the pleasure of children and adults.

Tahiti is the most populated and largest island of French Polynesia. We talk about Tahiti Nui, the big island, and Tahiti Iti, the small island or the peninsula of Tahiti. It is the entry during a trip to French Polynesia as Tahiti has the only international airport in the territory.

Island nestled between town and country, lagoon and mountain, white and black sand… Tahiti offers many activities to its visitors, there it is for any taste and age. It can offer several landscapes depending on the coastline that we follow. Its East coast is still wild and is between mountainside and ocean, while the West coast offers different landscapes playing with sea, luxuriant vegetation, and mountains.

In Papeete, the capital of Tahiti meets modernity and tradition. At the corner of a street, we can found art galleries, expositions, or street art decorating the walls of the city. The capital owns its own market place which offers daily fresh products (vegetables, fruits, fish…) and artisanal creations made from paeore (pandanus) handmade, jewelry, mono’i and floral compositions. The famous Heiva I Tahiti takes place here yearly which brings together sing and dance groups for a competition that has endured since 1881 on the mystic Tahu’a To’ata (To’ata place) previously Tahu’a Vaiete. It is during this competition that we can find the cultural diversity of French Polynesia.

Navigation time up to Moorea : 40min

Flight time from Tahiti to :

Tetiaroa or Marlo Brando’s private island. This private island is made up of 13 motu (islets) is only accessible by the sea for visitors. Only the hotel clients of the atoll: The Brando, can access Tetiaroa by plane with Air Tetiaroa.

Former place of chieftaincy and where important decisions were taken, Tetiaroa was bought back motu by motu (islets) by the actor Marlon Brando in the ’60s. This atoll belonged primarily to Pomare’s family (Polynesian royal family) who first gave it to a dentist and then Mr. Brando bought it back.

Over there, Time has stopped. It is still possible to see the remains of the past time thanks to the old foundations of the village of Rimatuu village. Rimatuu is the only motu that can be accessed and visited by strangers, the 12 other motu stay totally private. Among the 13 motu, Motu One is also called “bird island” because it houses hundreds of it, visitors can go around it, but they cannot access it not to disturb the tranquility of its residents.

Everything seems to be untouched over there, this atoll is preserved of the constant evolution of the world. There is no pollution in Tetiaroa because this atoll has no roads, so no cars. More than 167 species of fish and 38 native plants have been listed on the different motu to be protected.

Onetahi motu hosts the hotel: The Brando, and owns its own landing strip. This hotel, cohabiting in perfect harmony with nature and the space that surrounds it, is self-sufficient, producing its own vegetables and honey avoiding importation.

Distance from Tahiti to Tetiaroa : 50km

Flight time from Tetiaroa to :

Moorea is also called the Sister Island of Tahiti. This island has 2 main bays: Opunohu’s bay and Cook’s bay. The island is surrounding by a reef with 12 passes in total.

When we take the ferry from Tahiti to reach Moorea, we can see in the distance a pierced mountain, called Mou’a Puta. According to the legend, a famous warrior used a spear to bring Moorea and Tahiti together, but the song of the rooster surprised him, and his spread pierced the mountain from one side to the other, forming a hole in the middle of its peak.

Its white sand beaches are all more beautiful than each other.

Pineapple is the fruit the most popular on the island. Entire mountainsides are dedicated to its cultivation. The island has its own production plant: Rotui. This name comes from the name of one of the mountains of the island, Mount Rotui, the production plant is located at the foot of this mountain.

Various activities are proposed between sea and land, Moorea will never stop to surprise you.

Distance from Tahiti to Moorea : 17km

Flight time from Moorea to :

Huahine or « The woman Island » because it has always been governed by queens. It is separated into two parts by a channel creating Huahine Nui (“Great Huahine”, the principal island) and Huahine Iti (“Little Huahine”).

Landside, the silhouette of this island formed by the still wild, lush, and authentic mountains can, depending on the angles and the imagination, make one think of a woman lying on her side. Seaside, it a fauna and a flora in perfect harmony and quietness that visitors can discover with simply a mask and a tuba.

Past life of this island is still present through its 35 mara’e (sacred temples) each being from a different period.

The cultural heritage of Huahine, gives a sensation of royalty. Its inhabitants proudly carry their traditions and the modernity of their land. For sports enthusiasts, this island is the starting point each year for the famous va’a (dugout canoe) race: Hawaiki Nui Va’a.

Distance from Tahiti to Huahine : 180km

Flight time from Huahine to :

Raiatea is in the center of the Polynesian triangle linked by New Zealand in the Southwest, Rapa Nui or Easter Island in the Southeast, and Hawaï in the North. Raiatea is also called the sacred Island because it is the first island when the first Maoris landed a thousand years ago in huge canoes.

Numerous mara’e are still on the island, including the mara’e Taputapuatea: the biggest and most sacred of entire Polynesia. Raiatea is also the only island to own the tiare ‘apetahi, this flower is unique with an intoxicating perfume that is often compared to the shape of a hand because of the organization of its petals; we can find it only on Mount Temehani. This mount is protected, and the access is restricted because this flower is currently in the process of extinction.

Raiatea shares the same lagoon as Taha’a island and similarly to Tahiti and Moorea they are also called twins or sister islands. They would have been separated by a handshake by a god of the Polynesian mythology after a disappointment in love.

Its landscapes are magnificent and mountainous, Raiatea offers many peaks exceeding 1 000 meters of altitude. Few beaches are present on this island but do not miss to get on board a boat and discover coral gardens of the island or the wreck of the Norby which is done by scuba diving.

Distance from Tahiti to Raiatea : 219km

Flight time from Raiatea to :

Taha’a seems straight out of a dream. Over there no airport, the island is accessible by boat since Raiatea, its twin island. Taha’a has the same past as Raiatea because they were only one island before being separated by a handshake by a god of the Polynesian mythology after a disappointment in love.

Taha’a is called, Vanilla Island, because it accounts for 80% of the production of Polynesian vanilla. The vanilla greenhouses and drying racks can be found at every turn of the small island, giving it a unique and sunny flavor.

Thanks to its numerous coconut groves, coprah culture is still present in Taha’a thanks to its policy of support which allows keeping an activity for a great part of the island population.

The island is surrounded by a coral reef and many motu (islets), which allows its visitors to swim in the middle of more than 30 species of fish. Put on a mask and snorkel and discover its submarine world.

Distance from Tahiti to Taha'a : 219km

Flight time from Taha'a to :

Cradle of overwater bungalows, Bora Bora is a synonym of relaxation. Beyond its postcard appearance, this island has also a story: military trails, mara’e (sacred temples), a village of craftsmen… The inhabitants of the island and even the most experimented guides will not miss to tell you legends which will amaze kids and adults.

Landside, there is numerous hiking which allows to overlook the mystic lagoon of Bora Bora and to observe its numerous motu (islet). Se side, you will never get bored of admiring the turquoise blue of the lagoons, walk on Matira beach, snorkel in a shallow lagoon… do not miss to greet the fish of this magical island.

Flight time from Bora Bora to :

Maupiti is a small island divided into 3 big motu (islets). Despite its size, it stays impressive thanks to the greatness of its human, natural, patrimonial, and cultural resources. Its authenticity is its charm.

Over there, landscapes are beautiful, white sand beaches are as far as the eye can see as much as in the principal island as on the motu (islets) which surrounded it. This island has legendary peaks and ancient sites that are in perfect harmony with the lifestyle of the inhabitants of Maupiti.

In Maupiti the life is simple, time is no more than a detail, the hardest thing is to leave.

Distance from Tahiti to Maupiti : 315km

Flight time from Maupiti to :